Senator Christopher Lawrence “Bong” Go paid his respects on Thursday, July 2, to two of the four army intelligence personnel killed in a shooting incident in Jolo, Sulu last June 29. Based on initial reports, Major Marvin Indammog and Captain Irwin Managuelod were on a mission to capture suspected bombers when they were fatally shot near a Jolo police station by local policemen.

Senator Go expressed deep regret over the incident and pledged that those responsible would be held accountable. He vowed to provide support to the families of the deceased soldiers on top of the assistance package already provided by the government. 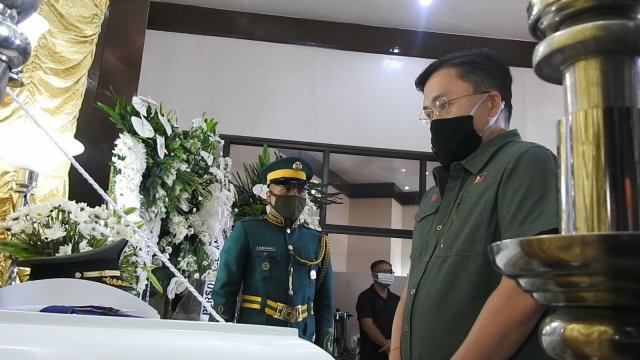 The Senator disclosed he and President Rodrigo Duterte would meet with top officials of the Armed Forces of the Philippines and Philippine National Police in Zamboanga City to get to the bottom of the incident. Philippine Army chief Lt. Gen. Gilbert Gapay had condemned the initial police report which he described to be “fabricated” and “full of inconsistencies” as well as “very misleading”. Go urged the leadership of the involved parties to keep a cool head as the President makes his way to Mindanao to speak to both sides.

“Pinagbabawalan na siya ng kanyang doktor at security. [The President] will still insist na bisitahin ang mga sundalo to also boost their morale in the fight against terrorism,” he added.

On Wednesday, Presidential Spokesperson Harry Roque disclosed the President had directed the National Bureau of Investigation to fast track the investigation of the incident.

Go stressed that health protocols must be put in place and followed in transporting LSIs to ensure that they are in good health when they arrive in their respective provinces.