North Cotabato Governor Nancy Catamco was strongly criticized for her order to take down all slogan of “Serbisyong Totoo” in all government vehicles and buildings and replace them with the phrase “North Cotabato Province”.

On November 25, Governor Catamco ordered Provincial General Services Office head Jorge Silva to “remove all Serbisyong Totoo tagline from all vehicles and all signages in the provincial capitol compound”.

In a Facebook post, aide of former Governor and now Vice Governor Emmylou Taliño-Mendoza Ralph Ryan Rafael said that Catamco’s order was clearly aimed against the former governor whose brand of public service was made popular by the slogan “Serbisyong Totoo”.

“On Politicking: Never demerit ones political campaign nor emphasize “by the people” perspective of governance when yours is way more politicized. I puke on these double standards,” Rafael said who is also an incumbent municipal councilor of Matalam.

On the same Facebook post, Rafael showed a photo of an overpass project of then Cong. Nancy Catamco with her name clearly emblazoned on the said structure as her “priority project”.

Another supporter of Mendoza, one Nikko Adrian Valenzuela Perez, also posted on his Facebook stating that “Serbisyong Totoo will never be erased.”

“One thing is for sure, Serbisyong Totoo is not only a tagline, it’s a brand of excellent governance serving multi sectoral spheres in Cotabato Province especially the youth. It is not only a line for no reason, it’s an exemplar of excellence, sincerity, and honor. Serbisyong Totoo will never be erased. Nakatatak sa puso’t experiences,” said Perez. 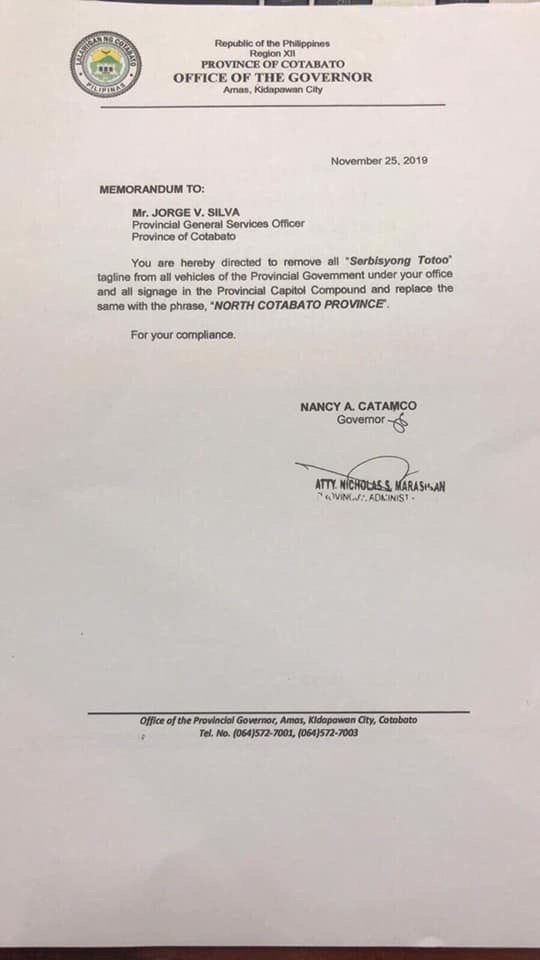