Skip to content
A public hearing of the Senate Committee on Local Government, conducted jointly with the Committees on Ways and Means; Finance; and Government Corporations and Public Enterprises, was held on Monday morning, September 16, to discuss issues currently faced by barangays. Among the bills taken up during the hearing was Senate Bill No. 391 or the Magna Carta for Barangays filed by Senator Christopher Lawrence “Bong” Go.

“We all know that the barangay and its officials are the immediate provider of frontline services to our fellow countrymen. Sila ang pinakaunang tinatakbuhan ng ating mga kababayan,” Go said. “And it is because of this reason that we have to further improve the barangays and address the woes of our barangay officials.”
Go said that this role played by barangay officials in the communities prompted him to push for a magna carta for barangay officials.
“These reasons, among many others, made me decide to file Senate Bill No. 391, which provides for the Magna Carta for Barangays,” said Go.
Go discussed his proposed measure, including the provisions that seek to promote the welfare of barangay officials.
“The bill outlines the basic priorities in each barangay, such as the right of every barangay to have regular supply of clean and potable water; to have readily available means of public transport; and the entitlement of every barangay to schools, health centers and barangay halls,” Go told. 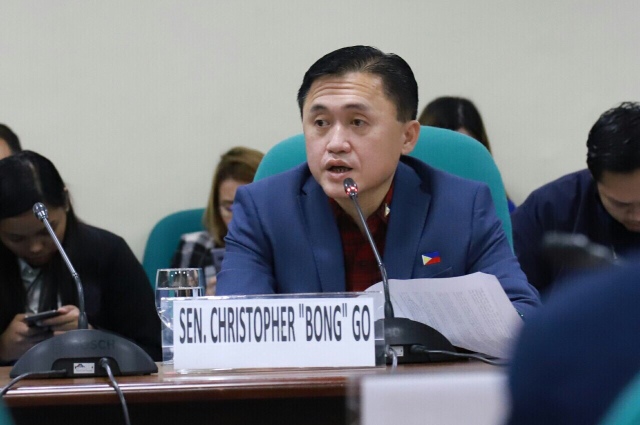 Go also lamented that lack of regular salaries for barangay officials despite their duties and responsibilities in their communities, which is why the senator pushes for better pay and benefits for them.
“Barangay officials are our government’s frontliners—first to respond, first to provide and first to serve. Despite this, they receive simple honoraria for their service. That is why under the bill I filed, barangay officials will now be treated as regular government employees receiving benefits that regular government employees enjoy,” Go said.
“The Punong Barangay, members of the Sangguniang Barangay, the Sangguniang Kabataan chairperson, the barangay secretary and barangay treasurer will now be entitled to salaries, emoluments, allowances such as hazard pay, representation and transportation allowance, 13th month pay and other benefits,” Go said as he cited key provisions of SB 391.
In support of the President’s war against illegal drugs, corruption and criminality, Go said that his proposed measure will also allow for barangays to appoint sufficient barangay tanods to help maintain peace and order in their communities in lieu of the current set-up where tanods are only limited to 20 per barangay.

“In line with President Duterte’s on-going war against illegal drugs, corruption and criminality, the bill allows for an appointment of additional barangay tanods by the Punong Barangay upon the concurrence of the majority of the Sangguniang Barangay members,” the senator said.
“This will ensure the maintenance of peace and order in the barangays. Surely, the security and safety of our countrymen must be met firstly in their immediate communities. This measure hopes to address that,” Go added.
Go reiterates his commitment to improving the welfare of barangay officials. During a past interview, Go said that they must be recognized so that they can continue to be more productive in carrying out their mandate.
“Tulad ng ibang kawani ng gobyerno, dapat ay ma-recognize at mabigyang importansiya ang kanilang role sa ating komunidad,” said Go.