MANILA — A recent photo of United Kingdom Ambassador Daniel Pruce and Filipino journalist Maria Ressa, bearing the hashtag DefendPressFreedom, has prompted an open letter from a British netizen, saying the picture and the caption paints the Duterte administration in a bad light.

Malcolm Conlan, a blogger, who is a known supporter of President Rodrigo Duterte reacted to Pruce and Ressa’s photo posted on the former’s Twitter account with the caption, “Excellent discussion with @AmbJohnHolmes and @mariaressa before she flew to London for next week’s Global Conference on Media Freedom, hosted by (UK and Canada). Maria will be joining 1,000 participants to #DefendMediaFreedom including 70+ Ministers, journalists and NGOs.”

“I hope you don’t mind, but I do think this photo and caption this gives the impression that you are supporting her stance and malicious accusations that there is no press freedom in the Philippines,” the blogger who is living in London said.

I am sorry to have felt the need to write to you personally, however I was most upset to see a photo earlier today of you with the CEO of Rappler, Maria Ressa with the tag line ‘Defend Press Freedom’ (see below).

This made my blood boil and was most upsetting. President Rodrigo Duterte cares very much about every single Filipino and allows them freedom of protest and expression, having met him personally, as you have, I can say he is one of the nicest people I have ever met.

I hope you don’t mind, but I do think this photo and caption this gives the impression that you are supporting her stance and malicious accusations that there is no press freedom in the Philippines.

The reality is that there is an almost daily criticism of the President by bias media of other Philippine owned publications in the country and not once has President Duterte tried to shut them down or control them in any way!

Maria Ressa was arrested earlier this year, following being sued by a private businessman in the Philippines and on the order of the courts. The authorities that carried out the said arrest were just doing their job as prescribed by Philippine law. Any citizen, whether they are journalists or not would have had the same treatment.

Secondly, Pia Ranada who works for Rappler was only banned by the MPC as there is evidence that Rappler has foreign backers, this is not permitted under the Philippine constitution.

Also, Ms Ressa and Rappler also has another case against her, being sued by the Bureau of internal revenue for Tax evasion. All of this has nothing whatsoever to do with her or indeed Rappler’s criticism of the President.

President Rodrigo Duterte and indeed the Filipino people gladly welcome the British Ambassador into the Philippines on the basis that you are there to promote British-Philippines relations and of course protect the interests of British citizens in the Philippines and not be critical of the policy of the country you are stationed in or indeed get involved in local politics.

This maybe even unintentional endorsement of the false accusations of Ms Ressa that she had been unfairly treated is a slap in the face for many Filipinos both in the Philippines and around the world including OFW’s in the UK who are unhappy about the constant campaign by Rappler to undermine and be unfairly critical of the current administration.

I actually write this email to you with a heavy heart, having been previously invited by your predecessor to the birthday party of Her Majesty the Queen in the British School Manila, I felt I had a good relationship with the British Embassy and that you would not directly get involved with Philippine politics, particularly as you are a guest in the country.

Thank you sir for your understanding. I do hope you are able to reply to this and give your side of the story. I have written this with apprehension being a British Citizen myself, but I do feel I have a right to call out any issue that concerns me. Hope that my right to freedom of speech won’t also be curtailed? 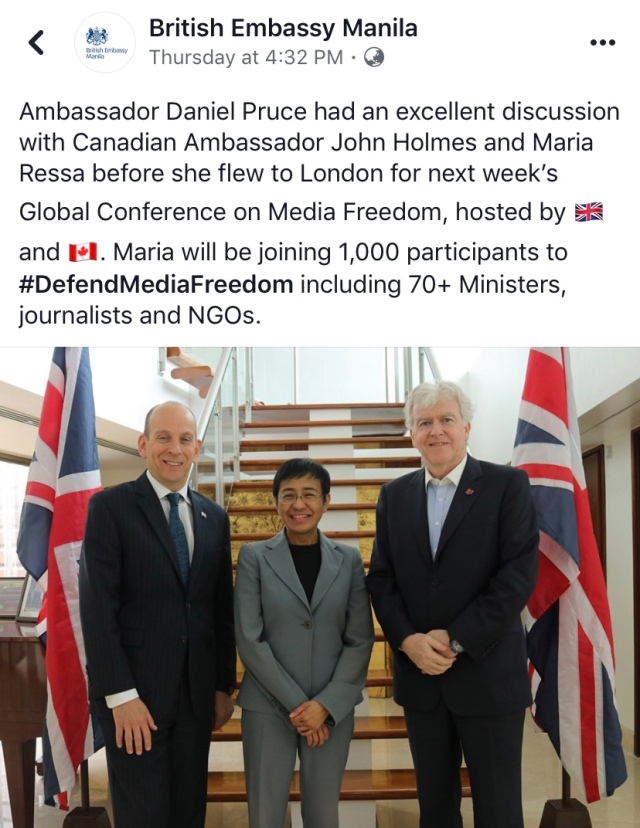