President Duterte expressed concern on the impact of the US-China trade war on global growth and economic integration. He urged both sides to resolve their differences and pressed ASEAN to strengthen its commitment to a rules-based multilateral trading system.

To this end, the President reiterated the Philippines’ commitment to work constructively with all parties to conclude negotiations on the Regional Comprehensive Economic Partnership this year, adding that trade should ultimately benefit the underprivileged segments of ASEAN countries.

He underscored that countries most responsible for climate change should be held to account. The President also pushed for enhanced regional efforts to combat marine debris and prevent the export of garbage to ASEAN countries.

The President noted the brewing competition among the big powers that is generating greater instability, fueling already critical flashpoints in various parts of the world – from the Middle East to the Asia-Pacific.

As Country Coordinator of the ASEAN-China Dialogue Relations, the President expressed grave concern over activities in the South China Sea that erode trust and confidence and undermine peace, security, and stability in the region.

He underscored that delays in the negotiations for a substantive and effective Code of Conduct is detrimental to the region. He urged ASEAN and China to act quickly noting that “the faster we finish the process, the more credible ASEAN and China will be as partners for security and stability”.

He called for the effective implementation of international instruments, such as the 1982 United Nations Convention on the Law of the Sea and the Declaration on the Code of Conduct in the South China Sea to create a conducive environment for negotiations and maintain peace and stability in the region.

The President conveyed his gratitude to the captain and crew of the Vietnamese fishing vessel who saved Filipino fishermen near Recto Bank in the West Philippine Sea last week. 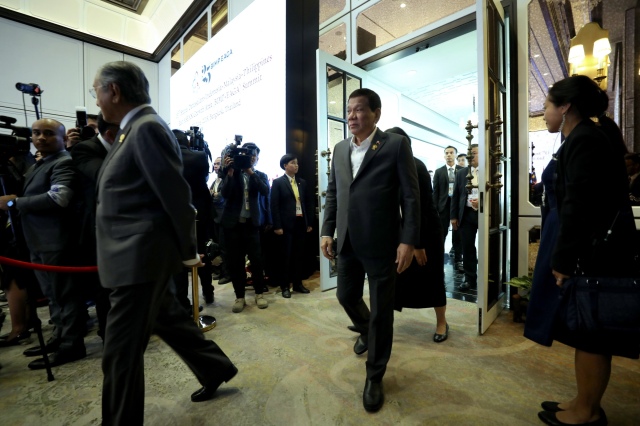 Amidst profound geopolitical shifts, the President called on ASEAN to be the voice of reason and moderation in the region, protecting time-honored principles of international law.

The Leaders agreed to promote greater connectivity to facilitate cross-border trade and narrow the development gap in the sub-region. They likewise agreed to enhance military and police cooperation to effectively address terrorism and piracy in the high seas.

President Duterte held bilateral meetings with Indonesian President Joko Widodo and Thai Prime Minister Prayut Chan-o-Cha to take stock of relations and mark 70 years of close friendship and cooperation between the Philippines and Indonesia as well as Thailand.

Presidents Duterte and Widodo lauded the completion of the two countries’ respective domestic requirements for the entry into force of the Philippines-Indonesia Agreement Concerning the Delimitation of the Exclusive Economic Zone Boundary. This landmark accord is an outstanding example of a peaceful and rules-based delimitation of maritime borders.

In a bid to increase trade with and investments from Thailand, the President met with about 20 Thai CEOs inviting them to invest in new industrial centers outside Metro Manila, such as Clark, Cebu, Bohol, and Davao.