During the celebration, Mayor Inday Sara Duterte awarded PhP 1.985 Million worth of livelihood project to 14 Former Rebels from Paquibato District, Davao City and formally announced the expansion of PEACE 911 to 18 more Barangays of Davao City formerly affected by communist armed conflict. This was followed by a vow of committment from stakeholders to sustain the gains of peace and promised to work together to bring development in Paquibato.

Paquibato which has been a conflict affected area for many years, and was the guerilla base of New Peoples Army in Davao City was declared conflict free after a successful peace program was implemented by the Local Government of Davao City with a strong support from the security sector.

It can be recalled that, alias Parago, a known NPA leader was killed in an encounter in the said area on 2015 and during the last week of April, 2019, community tipped off an arm cache in the area that yielded 22 firearms of NPA who used to roam in the area.

Paquibato District is an IP area of Davao City which is now a focus of the City Government of Davao to be transformed into a conflict-resilient area through their program “Terrorism to Tourism.”

“The objective now is to sustain peace in Paquibato and make it durable” Lt General Santos Jr. said. 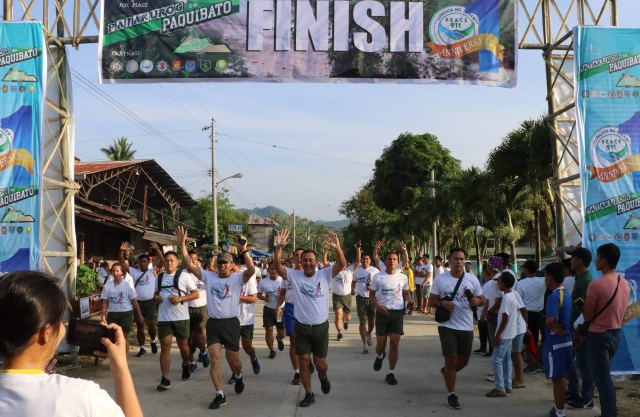 “We shall be in the forefront of supporting different conflict and cultural sensitive initiative and other peace endeavors of the Local Government Unit of Davao City through the PEACE 911 that will resolve the issues that were used by the terrorist group in agitating and organizing the communities thereat.” Lt. Gen. Felimon Santos Jr. added.