NSFA, Panacan, Davao City – Three encounters transpired in different areas of Eastern Mindanao as units under Eastern Mindanao Command sustains the conduct of security operations in their respective area of jurisdiction. For the past two days, troops of EMC averted CPP-NPA Terrorist Group evil plan in conducting atrocities against the communities.

Troops from 3rd Infantry Battalion (IB) encountered an undetermined number of the CPP-NPA Terrorist Group (CNTG) members along the periphery of Barangay Tambobong, Baguio District, Davao City in the morning of March 22, 2019.

In a report rendered by Ltc. Oscar Partuza, Battalion Commander of 3IB the encounter transpired while the troops are on the process of validating the information of the presence of CNTG members in the aforementioned area. The five-minute firefight resulted in the death of one CNTG member and the capture of one M16 rifle and one cal. 45 pistol. No troop was reported to have been hurt or killed during the firefight.

The incident resulted in the death of one CNTG member, the capture of one M16 rifle, recovery of three International Humanitarian Law banned anti-personnel landmine, landmine paraphernalia, and other CNTG belongings.

The killed CNTG cadaver was brought to Nilo Funeral Homes, in Brgy Luna, Surigao City for proper disposition and identification.

In the afternoon of the same day, another encounter transpired at the outskirt of So Bulak, Brgy Lower Olave, Buenavista, Agusan Del Norte between the patrolling troops of 30IB under Ltc Francisco Molina and an undetermined number of CNTG members.

No casualty was reported during the said skirmish.

Meanwhile, Lt. General Felimon T. Santos Jr., Commander Eastern Mindanao Command reiterated his directive to sustain the operations against the terrorist and prevent them from conducting atrocities that will hamper the socio-cultural and economic endeavor in the communities. 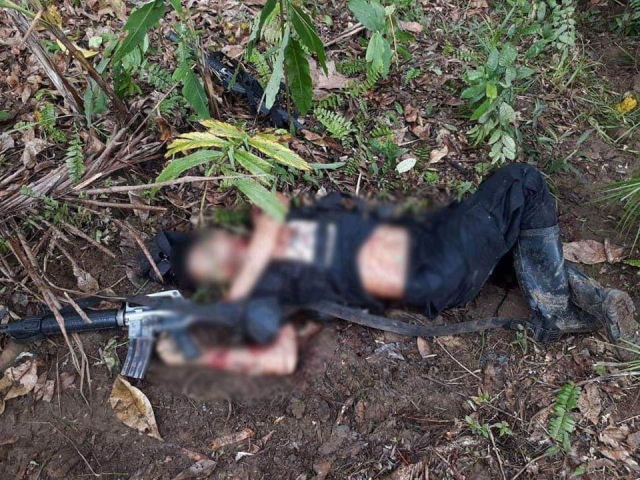 “While we are facilitating the resolution of issues and concern of our communities particularly those in the Conflict Affected Areas together with our partner Local Government Units, government and non- government agencies and organizations, let us sustain our security operations and not allow them to continue with their anti-development and anti-people terroristic act and plan as openly announce by Joma Sison to conduct attacks against our troops and communities and establishments.” Lt. Gen Santos Jr. said.