TAGUIG CITY — Former Special Assistant to the President (SAP) and senatorial candidate Christopher Lawrence ‘Bong’ Go today affirmed his solidarity with the PNP Special Action Force (PNP-SAF) in ensuring the safety and security of every Filipino and in upholding President Rodrigo Duterte’s fight against crime, corruption, and illegal drugs. 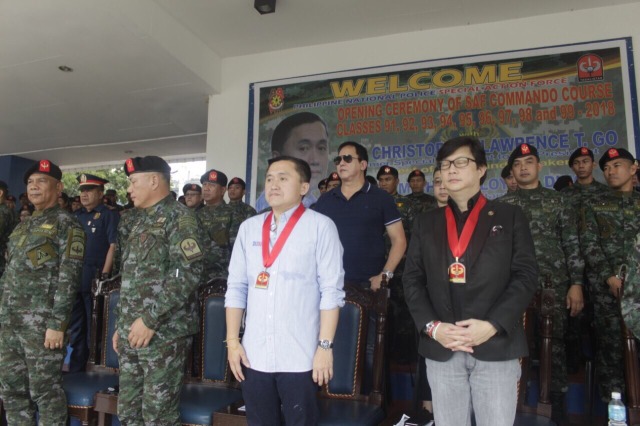 The SAF Commando Course is the foundational training program of the Philippine National Police’s (PNP) SAF Unit. Its curriculum is constantly updated and adjusted to provide SAF troopers with proper and appropriate knowledge in both combat capabilities and emergency response.

In line with his desire to provide quality public service to the Filipino people, Go, together with President Duterte and his administration, said that he would continue to fully support the police and the military in safeguarding the public.

“Please be constantly reminded that the President has your back and that the government is also doing its part to help each and every one of you,” he added.

Go also mentioned the improvement of the PNP Capability Enhancement Program. It supports the realization of the 10-year PNP Modernization Plan which has put emphasis on the acquisition and upgrading of its move, shoot, communicate and investigate capability. The funding of these procurement was realized through the directive of President Rodrigo Roa Duterte to provide the PNP with mission essential equipment necessary for the organization to accomplish its mission and functions.

Moreover, Bong Go said that he would continue on pushing for localized peace talks to end the decades of insurgency in the nation. He also mentioned about the “Balik Loob Program” by President Duterte wherein free houses, livelihood opportunities, and jobs are offered to armed rebels who would surrender.

As a candidate in the upcoming 2019 senatorial race, Go reminded the PNP and AFP to just stay loyal to the flag and not be biased towards or against particular candidates in the upcoming elections.