Yesterday, an explosion occurred near the Makar Junction at Brgy. Apopong that resulted in the injury to several of our fellow citizens.

This is a cowardly attempt to destabilize General Santos City’s peace and hard-earned economic development and progress. A spineless try to sow terror in the hearts and minds of the great people of this equally great city.

The local government unit of General Santos City would like to assure everybody that our security forces are currently investigating the incident and all government forces in the city and nearby locations are doing all we can to address the situation.

We are not alone, nearby cities and municipalities, provinces and regions, as well as the national government, have already expressed their full support.

We have also extended our help to the family and loved ones of all the victims of this despicable act.

Gensan is a city that has strived against atrocities and challenges. We were able to reach this height of progress in an atmosphere of peace and unity. We will never surrender to these threats. We will not let fear and terrorism sink us.

Gensan will stand amidst these trying times.

Our city will overcome this dire moment, the same way we have recovered and risen from all other dark episodes that have come to us in the past, we will rise up together. 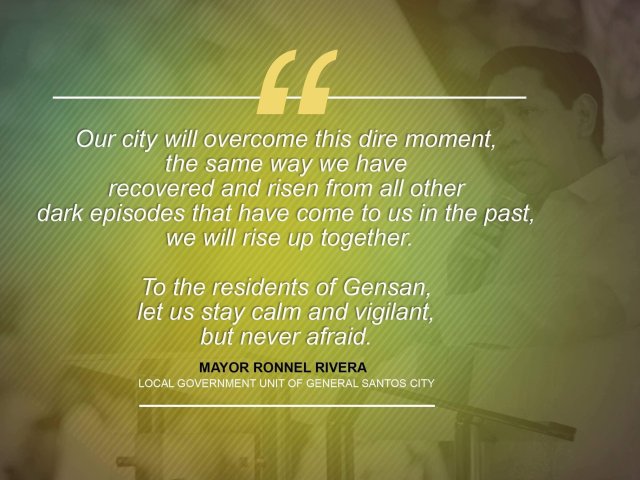 To the residents of Gensan, let us stay calm and vigilant, but never afraid.

Let us work together to protect the safety and security of our city by being alert and watchful.

We encourage everyone to report suspicious people, objects, and activities that you observe to your local authorities.

Daghang Salamat and God bless us all!