Efforts to resume peace talks between the government and communist rebels got a boost Friday when Special Assistant to the President Christopher “Bong” Go personally met New People’s Army (NPA) members for the handover of a police captive in North Cotabato.

Go went to Sitio Apog-Apog, Barangay Panaka, Magpet early morning and fetched police inspector Menardo Cui, who has been a prisoner of war (POW) of the communist group since December 2017.

Cui was treated well by his captors, according to the secretary.

[What’s important is that we got him back safe, and he said he was never hurt, that he was treated well in the hinterlands.]

Unfortunately, Cui’s wife died of cancer before he was released.

[It’s just unfortunate that he was not able to see his wife, who fell ill of cancer during the time he was in captivity. So I told him to visit his wife’s grave first. And take care of his children first. Make up for the lost time.] 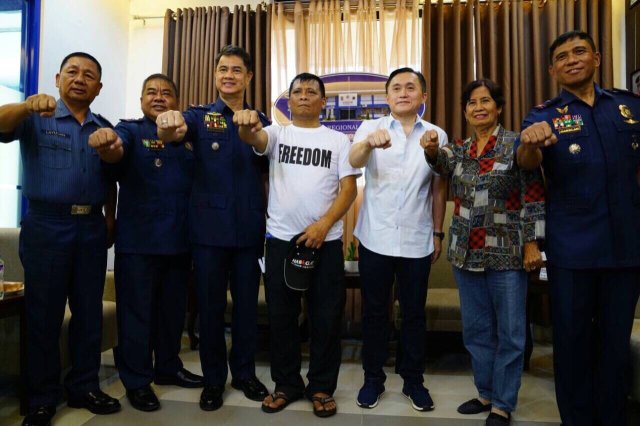 [I’m also grateful to President Duterte for extending his help, thank you, Mr. President. My heartfelt thanks to Sec. Bong Go, he personally went to fetch me in the hinterlands. Thank you so much.]

Cui will undergo debriefing, as well as medical check-ups before returning to duty.

Go promised to assist Cui and his family.

[I just told him that (he can ask me for) whatever he needs, so he can adjus before he goes back to work. I’m willing to help him; I’ll give him assistance so he could spend his time well with his children.]

Any sincere move to resume the peace talks is welcome, said the secretary, .

[‘Exodus For Peace’ said they are sincere in calling for (resumption of peace talks), so I said, ‘if you’re sincere, more so is the president.'”]

Go explained that with the help of Local Government Units (LGU), the Department of Interior and Local Government (DILG) and the peace panel under the leadership of Presidential Adviser on the Peace Process Secretary Jesus Dureza, conditions may be agreed upon by the NPA and the government in order to reach a true and lasting peace in the country.

The SAP added that he is not an authorized representative of the government peace panel, but he will make sure the requests made will reach the President.

[The Bangsamoro Organic Law or the former BBL has been ratified, we’re hoping it will finally bring peace with the Muslim rebels and now, hopefully, peace with the left will follow.]

Go recounted to the rebels the days when the president, then mayor of Davao City, would visit the NPA camps without aid of security guards.

[It just means that he trusts you (NPA), because even with just the two of us and without security, guns or anything, he entrusted his life to you.]

[You saw what happened with the Bangsamoro Organic Law, he promised to sign it into law in 48 hours, he fulfilled that promise yesterday, he signed it as soon as possible because he wants to have peace.]

[You chose him to be a leader, let’s support him because I know he’s sincere. There is no other president whom you can talk to and whom you can reach anytime.]